When to Take the Keys Away to a Senior’s Car 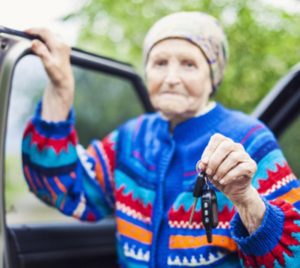 Most of us think we know when an aging loved one should stop driving, but most elderly people think they still can drive safely, and they strongly resist giving up the keys to the car.

Would you know when it’s time when to take the keys away from yourself? The chances are good that the answer is “No!” We are all loathe to give up the independence that driving gives us, and it’s hard for us to recognize that our driving skills, or other physical and mental skills, are not as good as they used to be.

State laws: As a group, seniors age 80 and older have the highest rate of fatal crashes per mile driven — even higher than for teens — according to the Insurance Institute for Highway Safety. Only 19 states make seniors renew their licenses more often than younger drivers. North Dakota drivers who are 70 years of age or older at the time their current driver license expires are generally required to renew their license in person at a local DMV office. There are no other restrictions on senior drivers. All licensees must take a vision test before renewing a license and may, in certain situations be asked to take a written test, as well.

Because most states aren’t much help, it’s up to families to act when a loved one is no longer a safe driver. As you observe your elderly parent driving, watch for these 10 common warning signs of unsafe driving:

The position of the Alzheimer’s Association is that a diagnosis of Alzheimer’s disease [or other types of dementia] is never, by itself, a sufficient reason for loss of driving privileges. We all age at different rates, and even the onset of dementia occurs differently in every affected person. They recommend that a person diagnosed with dementia, along with his or her family and friends, know and be aware of the problems caused by normal aging and the additional deficiencies that can develop in a person with any type of dementia. Now is the time to plan for the time when safe driving becomes an issue.

The declining cognitive abilities of a person with Alzheimer’s disease will ultimately make it unsafe for them to drive. All dementia patients may have additional deficiencies in abilities, such as:

If your loved one is not aware that they have become an unsafe driver and gets angry when you tell them so, they might be more responsive to advice from a physician or a driving assessment center. I was lucky that my husband, diagnosed with Alzheimer’s and showing signs of unsafe driving, was told by a physical therapist that he needed to take a road test. He passed the test with just 4% to spare, but he was given the following restrictions, which you could also suggest to your loved one before it becomes necessary for them to stop driving all together:

It’s been five years since my husband was given those restrictions. He has had a safe-driving record ever since, although he did get lost once going to a place he was sure he could find. He recently renewed his driver’s license, but the health questions he answered “yes” to on the application resulted in his being sent a form that must be signed by a doctor, if he is to continue to drive legally. His PCP “passed the buck” to his neurologist, whom we haven’t heard back from yet. Even though I already do most of the driving, we might be at the point where he is not allowed to drive even short distances, like his daily trip to the local gym 1.5 miles away. At least I won’t be the one responsible for making the decision to take away his keys, but I will have to do all the driving.

But, what if you or your loved one has no one at home who can do all the driving? Dakota Home Care may be able to help. Call us at (877) 691-0015 to schedule a consultation to see how a caregiver in Bismark, ND and the surrounding areas can help.

Giving-up driving is reportedly the most difficult decision a person can make. It affects their whole way of life and can also be a burden on loved ones. But be aware, giving-up driving is never too inconvenient when compared to the tragedy of a fatal accident. Watch for the signs of impaired driving, and be safe!

What Aging Parents Need from Us (And What They Don’t)

Questions to Ask When Choosing a Home Healthcare Agency

How to Help Seniors Enjoy the Holidays