Driving with Dementia: When Is It Time to Stop? 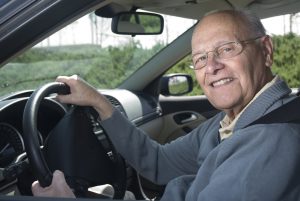 My husband is still driving, even though it’s been 17 months since I last blogged about “When Is It Time to Give Up the Car Keys,” and I reported how on a road test he had just squeaked past the minimum score required to keep his license. In that time he hasn’t had an accident or been pulled over for any kind of moving violation. Whenever we’re going someplace together, I drive. He doesn’t drive at night and he rarely drives anywhere that he hasn’t been before. The few times I have been with him, the only problem I’ve noticed is that he doesn’t always notice speed limit signs and tends to drive under, rather than over the limit. (This IS a warning sign.) He seems to have learned from the things the person testing him warned him about.

Normal Aging vs. Dementia
Normal aging does cause physical problems that may affect driving, such as diminished visual and auditory acuity, slower reflexes and lack of flexibility. However, we all age at different rates, and even the onset of dementia occurs differently in every affected person. Dementia patients have additional deficiencies in perception and visual processing; ability to pay attention for extended periods of time; ability to respond to multiple stimuli at once; ability to make correct judgments (such as which drivers have the right of way); and ability to react appropriately when pressured in a traffic situation.  Studies have shown that even though people in the early stages of dementia may be capable of driving under normal conditions, they have difficulty responding to new or challenging circumstances, and they are also at risk to becoming lost while driving. As dementia progresses into the middle stages, the ability to drive safely becomes highly compromised.

The Alzheimer’s Association does stress that, “The declining cognitive abilities of a person with Alzheimer’s disease will ultimately lead to the need for the individual to stop driving….At some point in the progression of the disease, driving-performance errors will present a safety risk to both the individual and the public.” So if, as they suggest, we are to involve the person with dementia in the decision making process to determine when it’s time to stop driving, what warning signs should we and they be looking for, and what restrictions can reasonably put on their driving? We don’t want to wait, as many people do, until there has been an incident involving an accident, getting lost while driving or other driving crisis.

Recently, my husband wanted to be the one to take my car in for the emissions testing and safety inspection required annually by the Utah DMV. Even he recognized it was not a good sign that he took His car instead of mine and had to come back home and start over again.
Examples of Restrictions

Risks of Self-Assessment
A majority of older drivers decide by themselves to give up driving — over 600,000 a year, according to the American Journal of Public Health. Dementia however, also compromises the ability of self-assessment, and most drivers with dementia fail to realize that their driving is unsafe. Consequently, drivers with Alzheimer’s dementia often continue driving after they have been advised to stop or even after they have had a crash.  If allowed to continue driving, 30 percent of drivers with dementia would have a crash under normal driving circumstances at the middle stages of the disease, as estimated by Researchers at Washington University in St. Louis.

Let Physicians and Driving Assessment Centers Take the Rap
If a physician determines it is no longer safe for a person to drive, the physician should recommend that the person “retire” from driving. The physician also should assesses the person who “retires from driving” to determine if he or she is depressed. Families and friends should be prepared to provide alternative ways of transportation and emotional support for when driving is no longer possible, to address feelings of lost autonomy or depression. The decision to take away driving privileges doesn’t have to be contentious for families. Physicians and driving assessment centers can play a key role on taking pressure off family members.
Giving-up driving is reportedly the most difficult decision a person can make, and it will affect their whole way of life. But be aware, giving-up driving is never too inconvenient when compared to the tragedy of a fatal accident. Watch for the signs of impaired driving, and Be Safe!
by Marti Lythgoe, Dakota Home Care Writer/Editor

Contact Dakota Home Care today at (877) 691-0015 to learn more about how we can help senior loved ones with professional home health care in Fargo, ND, as well as Bismarck and Mandan. Our care team is ready to help every step of the way!

PrevPreviousLiving with Alzheimer’s: How to Maintain Relationships
NextCan Lifestyle Changes Affect the Onset or Progress of Alzheimer’s Disease?Next