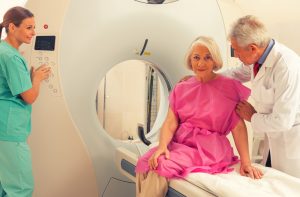 If you are postponing having yourself or a loved one tested for possible Alzheimer’s disease because you’ve heard it can only be conclusively diagnosed by a brain autopsy after death, wait no longer!  Research completed and reports released in the last 10 years, show that new advances in tests for diagnosing Alzheimer’s disease now make it possible to determine with a high degree of certainty whether or not Alzheimer’s is the cause of common behavioral indicators of dementia.

Having an early diagnosis helps people with Alzheimer’s and their families:

Reluctance to go to the doctor when you or a family member has memory problems is common. Some people hide their symptoms, or family members cover for them. That’s understandable, because Alzheimer’s dementia is associated with loss—loss of independence, loss of a driving privileges and loss of self. People may wonder if there’s any point in a diagnosis, if there’s no cure for the disease. They don’t want to know.

My family benefitted greatly from a somewhat early diagnosis. My husband started showing signs of cognitive impairment about two years before he consented to be tested. Then, through a combination of in-person testing with a neurologist and brain imaging, in 2016 we were given a conclusive diagnosis that he had a combination of both Alzheimer’s disease and vascular dementia. Because he had more than one cause for his dementia, he was not able to participate in clinical trials for Alzheimer’s treatments, but he was started on FDA approved medication to help slow its progression, and we knew to watch for signs of TIAs or small strokes.

As a family we met with a prescribed social worker, so our five grown children would all be told what their dad’s prognosis was and could ask questions about what to expect, My husband and I and two of our sons met with an attorney to set up a trust and other legal documents that ensured our financial and healthcare wishes would be carried out. I attended a nine-week seminar with about a dozen other women whose spouses also had dementia. The facilitator focused on “Stress Busting” strategies for caregivers.

Because of his early diagnosis, we had five relatively good years to plan and to enjoy each other and our family, before he went suddenly downhill and passed away in only three months, more due to vascular issues than Alzheimer’s. [Note: the progression of all types of dementia varies from person to person.]

Published studies conclude: Recent NIA-supported research has greatly advanced the ability to detect changes that can occur years, even decades, before the first symptoms of Alzheimer’s and related dementias appear. For example, researchers are now able to image [via a PET scan] both beta amyloid and tau in living humans and can detect changes in these factors before symptom onset. Researchers have also characterized changes in the sense of smell as an early indication of cognitive impairment.

For decades, brain autopsies have demonstrated that neurofibrillary tangles made of tau proteins are indicative of Alzheimer’s disease. Now, through brain imaging while the person is still alive, doctors are able to validate plaques and tangles and also shrinking of the brain, another determining factor. This is leading to even more tests for diagnosing Alzheimer’s disease, a better understanding of its neurobiology*, and the development of treatments that could modify the progress of the disease.

What to Expect When Being Evaluated For Memory and Cognitive Problems

If a primary care doctor suspects mild cognitive impairment or possible Alzheimer’s, he or she may refer you or your loved one to a specialist who can provide additional assessment and a detailed diagnosis. Specialists include: geriatricians, neurologists, neuropsychologists, and geriatric psychiatrists who use a variety of approaches and tools to help make a diagnosis and prescribe care.

Ruling out other conditions is usually the first step. A doctor will ask about your medical history and perform a physical evaluation to check that you don’t have other health conditions that could be causing or contributing to your symptoms. These could include sleep apnea, strokes, Parkinson’s disease, depression, illnesses as simple as a UTI, or medications that may be interfering with memory. You may have laboratory tests to rule out other disorders that cause some symptoms similar to those of Alzheimer’s dementia, such as a thyroid disorder or vitamin B-12 deficiency. Unlike Alzheimer’s and other dementias, these conditions often can be reversed with treatment. If most or all of those possibilities are ruled out, then more specialized tests are prescribed.

To assess memory problems and other symptoms, a neurologist or neuropsychologist may first perform short cognitive tests that evaluate memory, thinking and simple problem-solving abilities. More comprehensive and time-intensive cognitive status tests might be prescribed to evaluate executive function, judgment, attention and language. You may be asked to answer questions or perform tasks associated with your cognitive skills, such as your memory, abstract thinking, problem-solving, language usage and other skills.

These tests also help doctors determine the stage of your dementia and if you’re able to safely conduct daily tasks such as driving and managing your finances. They provide information on what you can still do as well as what you may have lost. Doctors look for details that don’t fit with your former level of function.  The doctor may also ask a family member to provide input about changes in your thinking skills and behavior, as it’s often difficult to recognize such changes in oneself.

Brain-imaging tests provide the most conclusive evidence that Alzheimer’s disease or something else is the cause of your cognitive issues. They also establish a baseline to track the progress of degeneration.

The most-often used brain-imaging tests for diagnosing Alzheimer’s disease are:

Professionals from Dakota Home Care are trained to teach you and family caregivers strategies to make your home more comfortable, establish routines, plan activities and manage changes in skills to minimize the effect of Alzheimer’s disease on your everyday life. Contact us online or call us at (877) 691-0015 to learn more about our services and why we are a top home health care provider in the Fargo/Mandan/Bismarck area.

*Neurobiology is the study of cells of the nervous system and the organization of these cells into functional circuits that process information and mediate behavior.